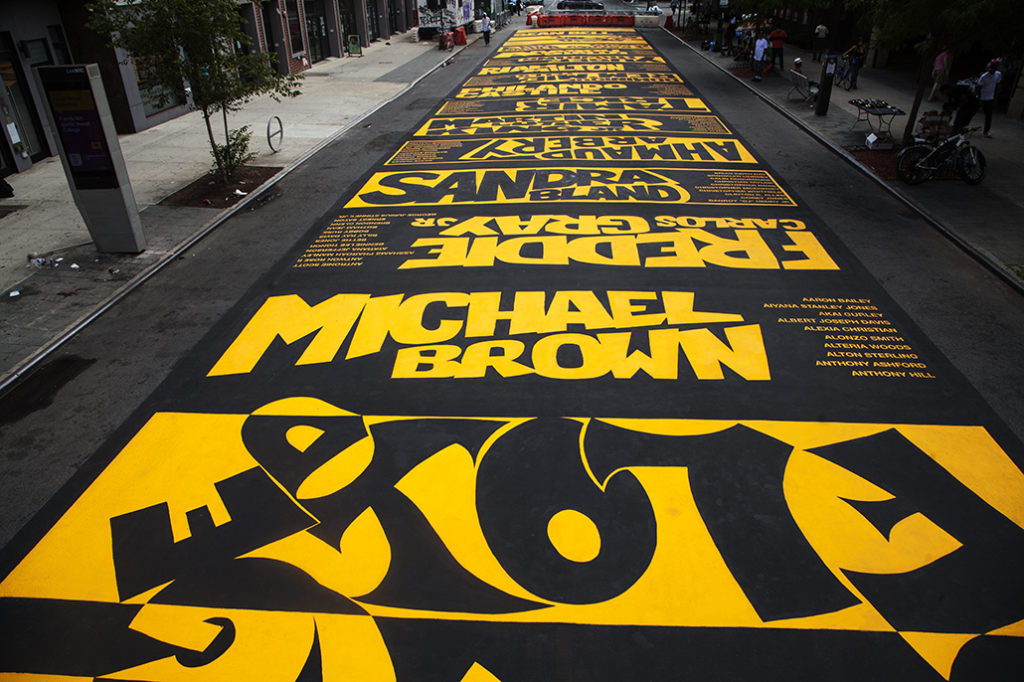 Photo credit: Hollis King/Courtesy of the Billie Holiday Theatre.
Photo Credit: needpix.com
June 30, 2020
Author: Rich Monetti
Views: 194
2020 is a year we’d all like to forget, and the convergence of two ground shaking pandemics have hit our nation hard.  Unfortunately, America crises usually has people of color taking the brunt of the pain.  So Dr Indira Etwaroo of the Billie Holiday Theatre knew that Brooklyn artists wanted a platform to express the duress of the moment.  Inspired by the Black Lives Matter street mural in DC, Fulton Street now shines in bright yellow letters and has encompassed America’s most densely populated African American community under an umbrella of healing and solidarity.   But while ameliorating suffering has its place, change also requires a catalyst, and right outside of the theater, the mural does so by paying homage to a most pivotal moment in civil rights history.
When Emmitt Til was lynched in 1955, his mother insisted on an open casket. Mamie Till wanted the world to see the full force of the atrocity.  So in addition to listing 150 victims who sparked a moment or a movement, 20 rectangular images exclaim the phrasing.  “They are a symbolic row of caskets and have in fact become the open caskets to the world,” said Etwaroo, who is the theatre’s Executive Artistic Director.
It was a view that Billie Holiday could only lament. In turn, the long standing anti-lynching platform of this American great is definitely in ear shot. “Her name helps to resound and resonate presence – even in this moment,” said Etwaroo.
Strange Fruit stands out especially among Holiday’s catalogue and helps symbolize the role music and art have played in African American survival. “Jazz is our response to terrorism, domestic terrorism,” she asserted.
A necessary outlet since fire meeting fire has never been the way.  “For 400 years, we’ve kept our cool instead of burning down houses,” said Etwaroo who received a
PhD in Cultural Studies and Masters in Dance Education from Temple University.
The scholar doesn’t have to stray far either when it comes to having to exercise restraint.  “Some people have walked by and said All Lives Matter,” she lamented.
But art has an answer once again, and the good doctor referenced Rapper Talib Kweli’s  analogy to clarify.  One house on fire the refrain goes, it doesn’t make sense to say All Houses Matter.
The same goes for the All Lives Matter retort. A disproportionate amount of black lives are impacted by racial violence, disinvestment in communities and inequalities across the board.  “African Americans as a community – it is a house on fire,” said Etwaroo who has  produced thousands of events with the likes of Wyclef Jean, Mike Nichols and Philip Seymour Hoffman.
Nonetheless, the bold 565 foot long statement speaks to the urgency, and she’s happy to see a diverse cross section of New Yorkers are getting the message.   In fact, they have done so with more than just optical approval.  “They weren’t just coming to see the mural, they volunteered to become part of the painting,” she revealed.
The artistic effort certainly did not suffer as a result.  On the other hand, the paint crossing between Marcy Avenue and Brooklyn Avenue has definitely run. “Other boroughs will be creating their own Black Lives Matter murals,” Etwaroo boasted.
She also praised the support of the mayor and the contributions of councilman Robert E. Cornegy, Jr.  But one mural on every city block wouldn’t be too much in her estimation.  Still, the activist hopes people don’t stand pat. “We want to make sure we’re all moving beyond the symbols of change and actually doing the work,” she said.
Brooklyn has already taken note and initiatives have begun.  “People are planning projects around the mural,” Etwaroo said. “They’re coming to me and saying can we do this or can we bring a student group here.”
In response, she defers ownership and renders any and all catalysts back to the borough.    “This belongs to the people,” she confirmed.
But words do not do justice.   A tearful grandmother kneeling before her grandson’s name, parents unable to contain their emotions and family members face timing to relatives across the country,” she concluded, “ unless you see those 150 names in person, you really don’t understand the profound power of what it is.”
Tags: Black lives matter Mural