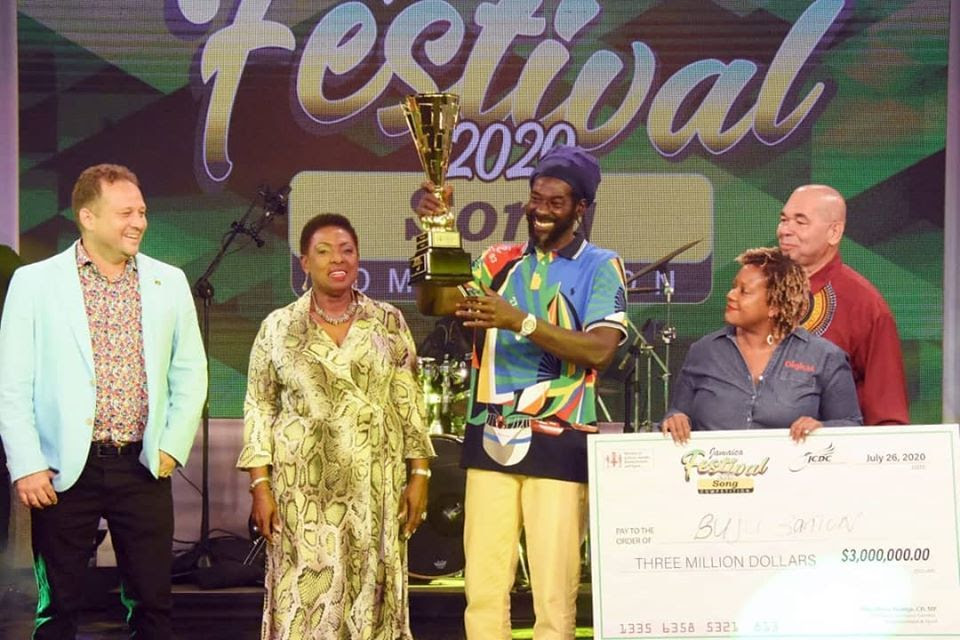 Just in case you missed all the headlines, Buju Banton was voted the winner of the 2020 JCDC Festival Song Competition!

The last time I was so excited about Festival was in 1984, which was also the year I migrated. I left the excitement of Festival when I left Jamaica. This year the excitement returned. I’m sure I can speak for many persons in the Diaspora when I say “thank you”  to Minister Babsey Grange and the JCDC for including the Diaspora this year.

Leading up to the finals Sunday night, I felt the return of the 1971 contest when “Cherry Oh Baby won”. Children across Jamaica were fully involved with that song’s popularity. I recall being fearful that another song, a sleeper, would have snapped victory out of the hands of young Eric Donaldson, thankfully it did not, and “Cherry Oh Baby” is now forever in music’s history. This year was different for me. The competition was stiff, all the festival songs were exciting and had the potential to be a great representative for the Jamaica festival season.

My personal favorite was Shuga, One People. There was no doubt in many people’s minds that Shuga was the best singer in the competition and many wanted her to be another female champion. Her song and video “One people oh! One country oh oh! Spreading love everywhere we go.” Spoke to the oneness, unity, and equality shared among Jamaicans; it was a great piece of work. Nazzleman, the energy bunny had the right feel for the festival spirit and he is quite the performer. “My sweet Jamaica. Whooooaaa. Han inna de air!! Everybody jump put yuh Han inna de air….” is what we expect for the festival song. His performance was always optimum. Either of these two songs on any other occasion, could have easily taken the top spot in the competition.

There was also a lot of love for LUST, Wave the Flag; “All ova di world all ova, dem love de Jamaican culture” with four giant singers Lukie D, Tony Curtis, Thrilla U and Singing Melody. Also, Xtra Bigg with “Jamaica a Paradise” enjoyed a lot of social media views. I believe his future is very bright. He has his unique style with an almost off-key sound, you never know where he is going with the tune but he always ends up at the right place. We also hope to see Radix OD again, he is a great singer and great talent.

I don’t think anyone was surprised by the winning song, most called it from the first day. Many people loved the songs listed above and would want to see them win, but when it came time for voting, their clicks ended up on Buju’s name. It’s not that Buju’s song is better or more festive; It’s just that it is Buju Banton and the hook stays in your head: “No matter where in this world I go, I am a Jamaican.” A couple of voters bellowed after the win, “dat deh song wouldn’t win if Buju neva sing it”. There might be some truth to that but it’s a validation that Jamaicans everywhere love Buju Banton.

For the other winners last night, you can’t deny the clanging of the pot cover with Sakina’s song “We are Jamaica” in third place and all the hours Papa Michigan spent training individuals on social media to do the “Jamaica Dance.”

It was great to see Toots again as a finalist in this competition. 1966 seemed such a far distance away, yet he turned up to help bring this contest to stardom again. Freddie McGregor was a great balanced artist in the lineup. He created the awareness that we can move the needle and make the Festival Song 2020 album a chart-topper. Jamaicans at home and abroad in the Diaspora responded.

Next year will/should be different. The JDTAN suggests a few additions for the 2021 song competition to encourage continued transformation.

Thanks to Jackie Night and Barbie Mudahy on the JCDC team and Xavier Murphy of Jamaicans.com. Thanks also to all the artists, I interviewed most of them on the Jamaicans.com platform. I think there is a strong bond that was formed among them during the Finals.

The Jamaica Diaspora Arts, Culture  and Entertainment Taskforce in the JDTAN was happy to support the promotion of the Festival Song competition this year. Truss mi,  the excitement in the Diaspora tun up this year, it was great, and we are looking forward to more!