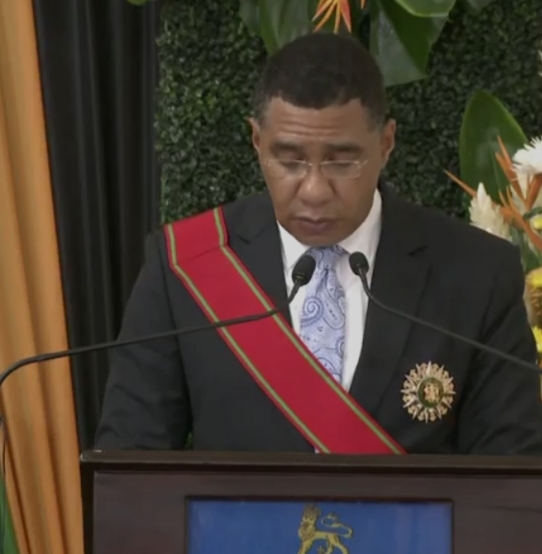 Prime Minister Andrew Holness, has  committed to strengthening the government’s anti-corruption framework, as he seeks to maintain public trust.

Mr. Holness who was speaking during his first address to the nation as Prime Minister, since his September 3 re-election,  noted that each member of his government has a pivotal role to play in ensuring the full recovery of the country amid the COVID-19 pandemic.
To this end, he said members of his government cannot afford to serve their own interests but rather, the interest of the people of Jamaica.
“Every member of the government must understand that this mandate is not about them. It is about the people. No princes nor princesses were elected. You have no divine right or entitlement. We are servants of the public.”
The Prime Minister indicated that by all means necessary, accountability and integrity will be upheld  by his government, which he noted is a step in the right direction.
In addition, he stressed his administration’s committment to preventing acts which he notes could weaken public trust and damage the reputation of the government.
“I have indicated to the Executive Director of the Integrity Commission, that each elected representative and each appointed minister will  participate in the sensitization and public education programmes to be established by the Integrity Commission…to ensure that they are seized by their responsibility under the law and that they understand that this is an accountable government.”
Prime Minister, Andrew Holness
The swearing in ceremony which saw him being sworn in for the third time as Prime Minister,was also attended by the Governor General, Sir Patrick Allen, and a small audience of 30 persons including Holness’ immediate family. The ceremony took place at Gordon House.