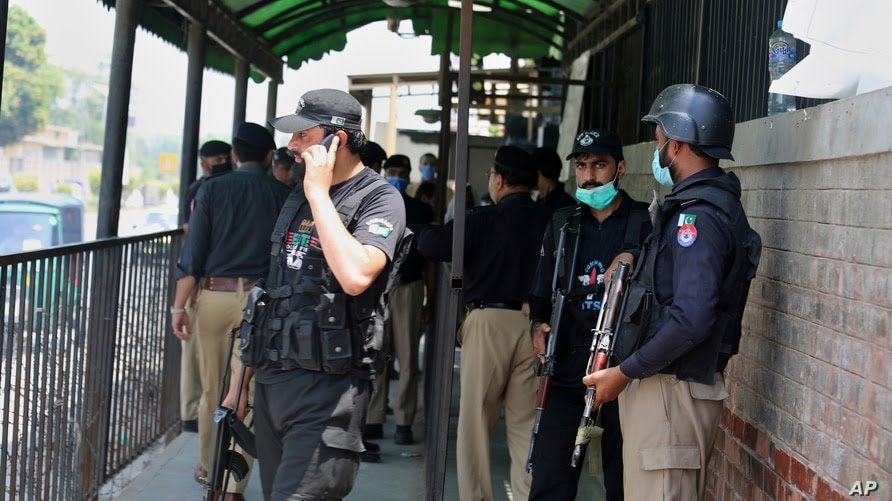 Police officers gather at an entry gate of district court following the killing of a man in court accused of insulting Islam, in Peshawar, Pakistan, July 29, 2020. Photo Credit: voanews.com
July 30, 2020
By: ONN
Views: 259
Spread the love

A man accused of blasphemy was shot and killed in a courtroom in Pakistan on Wednesday.

Police officials say Tahir Ahmad Naseem,  was on trial for claiming he was a prophet when he was shot six times during a hearing in his case at a district court  in the northwestern Pakistani city of Peshawar.

They say the culprit has accepted responsibility for killing him for blasphemy. He was later arrested from the scene.

Naseem had been in police custody since 2018 when he was accused of having committed blasphemy by claiming to be a prophet – a violation of Pakistan’s strict blasphemy laws that can carry the death penalty for certain offences.

No one has been executed under Pakistan’s blasphemy laws, but at least 77 people have been murdered in extrajudicial killings and mob violence since 1990.

According to UPI news, Saeed Zaher, a lawyer who was present at the courthouse during the shooting, said members of the public are allowed to observe trials but an observer being able to smuggle a weapon would constitute a security breach.